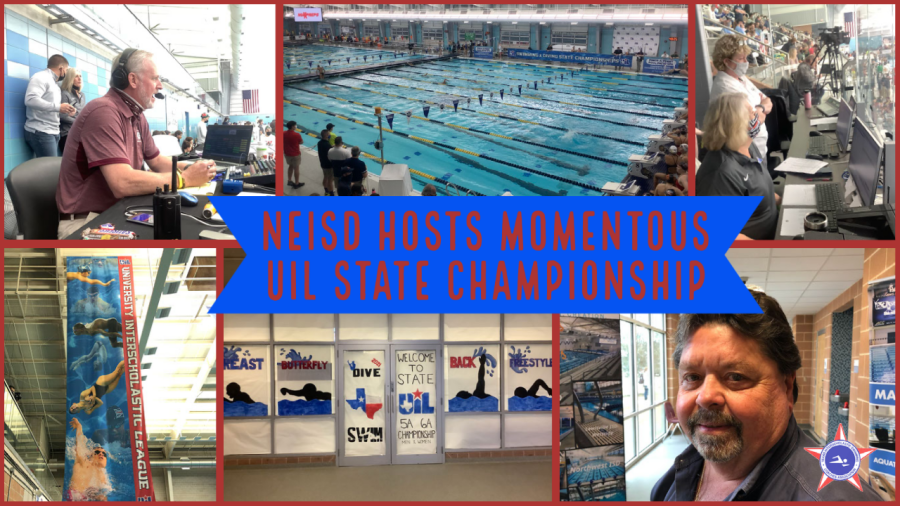 SAN ANTONIO In the midst of a season which many coaches thought would come to a sudden halt riddled by the COVID-19 pandemic, the staff of North East ISD’s Josh Davis Natatorium & Bill Walker Pool came together with the UIL to host a spectacular State Championship for our athletes and their coaches.

Back in November the UIL staff was notified that the University of Texas would not be opening their facilities to the public. This became a major issue regarding their August decision to split the state meet into two meets on two separate weekends to limit the number of participants in the pool area at one time. Led by David Johnson, a Theron Pickle Lifetime Achievement Award recipient, NEISD put together a plan to host the statewide championship with only a few months and one in-person meeting to prepare.

Once informed of the issue, UIL started reaching out to facilities around the state. Johnson then reached out and to UIL and told them he would help in any capacity to find a location. UIL Assistant Athletic Director for Swimming & Diving, Brandy Belk, then reached out to Johnson asking if he would be willing to let the state use his pool. He started putting ideas together and sending plans to Belk to show how his staff would set up the meet. “It all started with numbers,” said Johnson. With the COVID limitations, “everyone wanted to know the numbers – how many could we hold, how many spectators could we have.”

After just over a month of planning via phone, Belk and the UIL staff went to San Antonio to visit the pool and the setup. After this initial visit and confirmation by both UIL and NEISD, it was officially announced to the coaches and athletes that the 2021 state championships would be moved to San Antonio and North East ISD’s Josh Davis Natatorium & Bill Walker Pool. Once location was confirmed and the contract was signed, Belk and Johnson started even more of the text and email “back and forth” to establish the meet plan. Johnson says he focussed on continuity from what coaches were used to. “From packet pickup to competition, we wanted the meet to be as similar as possible to what [the coaches] were used to from past years.”

By the time the region meets had been completed and the state championships were only a week away, Johnson and his staff were ready. They had already hosted nine UIL district and region meets, the TAPPS Division 1-3 championships, and one TYR Pro Series meet. Everything was in place for a successful girls championship until nature interfered and UIL had to reschedule. At this point the 6A Girls would swim their meet just under 36 hours after the 5A Boys completed their championship.

Obviously with a new location and various limitations due to the pandemic, changes had to be made. One of Johnson’s big changes was the assigning of warm-up lanes for the state meet. “We couldn’t have everyone jump in the competition pool. We had to spread everyone into the 36 available lanes.” Coaches seemed to take this very well. Coaches enjoyed having the extra lanes during the meet as well since it allowed for more warm-up space before and after races.

Another major change was that diving had its own venue. As one coach put it, “the spectators didn’t need a telescope to see what was going on. They got a great view for the cost of a single ticket.” Some of the officials and coaches also commented on the fact that having a separate diving area allows for a quieter space providing the divers with a better focus.

Both Boys and Girls meets were great successes due to the commitment of Johnson and his meet staff made up almost entirely of coaches from NEISD Aquatics and the Alamo Area Aquatic Club. The staff worked tirelessly to accommodate the athletes, coaches, and parents while still working to institute COVID-19 protocols.

The TISCA Board of Directors wants to recognize Dave Johnson and staff on their efforts to host the meet and commend them on an outstanding meet experience. Thanks to them, our athletes and coaches were able to successfully finish out a tough season with a state championship.

There are no comments for this announcement.